9-11 will live in our minds, hearts and soul forever.  On September 11, 2001 four airliners where hijacked, destine for suicide attacks against the United States.  Two planes were flown into the World Trade Center in New York.  Another plane was sent crashing into the Pentagon outside of Washington.  The last plane crashed into a field in Pennsylvania.

Over 3,000 people died during the attack in New York,  that number doesn't include the hundreds of firefighters, paramedics, police officers and first responders who also lost their lives.

Over 125 civilians and military personnel lost their lives at the Pentagon. To that number include the 64 people on Flight 77 which crashed into the building.

All 45 people on board Flight 93 lost their lives when the plane crashed into a rural area in Pennsylvania. We will never know what plans the terrorist had for that flight. 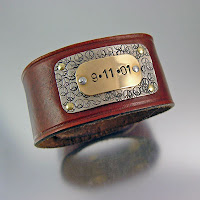 This leather cuff bracelet is in memory of everyone and everything which happened on Tuesday, September 11th, 2001.  Wear in memory; wear it as a proud American.


There is only ONE of these bracelets.  Be the first and proud owner of this one of a kind 9-11 bracelet by visiting My 9-11 Bracelet before its gone forever.


This is an original concept design made artist Julie Teeples.  The images, idea and concept is intellectual property and is protected by copyright law.
Julie Teeples Oak City Gallery
Email ThisBlogThis!Share to TwitterShare to FacebookShare to Pinterest